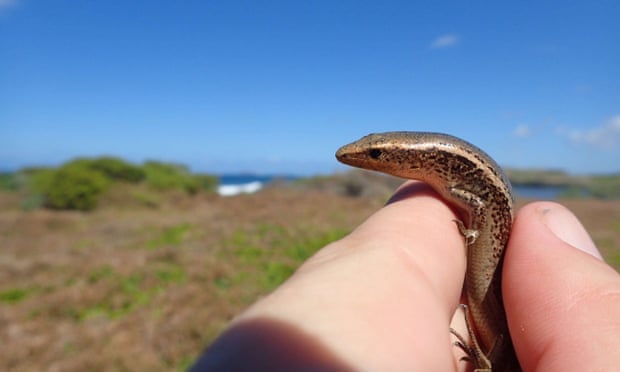 The bad news? Last year, a terrible shipping fuel spill contaminated the habitat of several critically endangered reptiles on the island of Mauritius, including two species of skinks and the lesser night gecko.

The good news? Folks at the Jersey Zoo (no, not that Jersey; it’s the island of Jersey in the English Channel, which has a great, conservation-minded zoo) have brought those reptiles that were able to be rescued into breeding programs there, with an eye toward eventual restoration to their habitat.

The fuel spill accident occurred during the height of Covid (August 2020) and forced gas-mask-clad rescuers on the island (located off Madagascar) to scoop up quickly whatever creatures they could find, as the fuel spill was toxic to them as well. The two varieties of skinks (Bojer’s skink and Bouton’s skink) and the gecko species are breeding well, in a genetic conservation program known as an “ark”. But the creatures may have to wait a while until they can get back to their ancestral home (and into their ecologically important niche): the oil has quite possibly contaminated the area for decades. More details of this harrowing but heartening rescue story can be found here.

We hope these beautiful, winsome creatures are soon and successfully restored to their home territory. And we give kudos to the hardworking conservationists involved in their rescue!