Shortly after the Covid lockdown, RARN got a phone call from a worried resident of Woodland Hills. The person had found a gravely injured turtle—an adult female map turtle, “Mappie”, to be precise—in their front driveway. They had no idea what to do but found RARN and soon brought the animal in. Mappie’s front feet had been chewed off by some predator, probably a raccoon. She was no doubt in pain and would probably have died if the neighbor had not contacted RARN.

Sabine Bradley, RARN’s president, had cared for similar wounds on a red-eared slider before and knew what to do. Mappie was put on the antibiotic Baytril (using the correct dose for her size) and was kept spotlessly clean. During the day Mappie was brought out of the water and put into a container with a towel to let her dry out and give the wounds time to heal. Slowly but surely (well, she IS a turtle!) Mappie’s injured tissues dried up and fell off. She was getting better.

A few weeks later, because the neighbor had put out flyers about finding a stray turtle, RARN got another call: Mappie’s owner, who lived next door to the neighbor! He had a large outdoor pond with a number of turtles and was horrified that his turtle had been taken or had wandered away. Sabine told him she was happy to give Mappie back but she could not release her in her present condition; she was still too injured and needed continued doses of antibiotic. The owner was content to wait until his turtle was ready to come home.

That just happened last weekend! Five months after Mappie had her very sad adventure, she had a joyous homecoming. And she came home to a brand-new, beautiful indoor pond. Her owner decided it was too risky to have his animals subject to predators outside.

Here is a picture of the happy reunion! 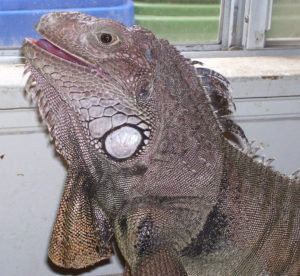 Because I made it! When I was about three months old, I was picked up off the streets of West Hollywood by two kind gentlemen. They kept me warm and safe until they could leave me with RARN. Boy, was I sick! A lady treated me in her home for malnutrition, severe dehydration, and a bad case of intestinal parasites.

For the past 21 years I’ve had fresh fruits and vegetables to eat, some direct sunlight, a daily warm shower or two, and plenty of high places to climb to, which I love. But the missing spines on my back show I didn’t get the kind of care and food I needed when I was very young.

I would never have survived those mean streets of Hollywood without RARN. Literally.

See why I can’t stop smiling?

Hello! I’m Bibi, and I’m a juvenile iguana (about 5 months old). My story starts out sad but ends up great!The little girl who used to take care of me didn’t really know how. She didn’t know I need direct sunlight, with places to cool off, just about every day. She didn’t know that my species lives in the rain forest and so I need to be misted with cool water. She didn’t know what foods I like—torn-up collards and mustard greens, bits of chopped mango and melon, sweet potato, squashes, green beans and blueberries. Pretty soon my legs started to swell and my spine bent. I was very weak, I would shake like a leaf, and my bones were getting broken because nobody knew what I needed.But here’s the happy part. One day, the little girl’s uncle noticed how sick I was and they took me to a special reptile doctor. He put me on calcium supplements and good food, with sunshine, water misting, and lots of care from a kind lady in RARN. Now I’m on the mend and will be a loving animal companion all my life!